Following yesterday’s Asian food haul post, here’s an easy delicious ramen and hirata bun recipe I created just for you (and my belly). As you may know, I am obsessed with Asian food (genuinely nearly just went off at the boyfriend on discovering he and a friend at dinner in Chinatown without me yesterday. Even though I was busy and on the other side of town…) so it was super exciting for me to get to make this! 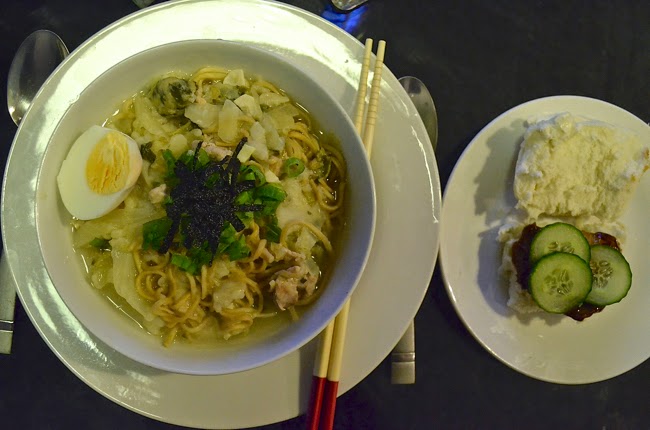 The entire meal took less than 30 minutes to make and I’m proud to say that the recipe is completely my own, with a few tips/hacks shared with my by the incredibly friendly Asian food shop owner <3 and as with all recipes I encourage you to adjust to your taste as you go! Here it is –>>

Ingredients
For ramen (serves 4):
-1 large pack (approx 20) Chinese dumplings (you can get these frozen from most Chinese food shops, have a Google, you’ll be surprised to find how close your local one is!). I went with seafood and chive but you can choose whichever flavour you like!
-5 tablespoons thai fish sauce
-4 diced cloves garlic
-4 spring onions
-1/2 white cabbage
-dried egg noodles
Optional extras:
-2 pork chops
-2 eggs
-Nori (sushi seaweed) to garnish
-Handful of spinach (I actually forgot to put this in mine *d’oh* but I would recommend adding a few leaves!).

For hirata pork buns (serves 4):
-4 hirata buns (again, you’ll find these in the freezer section of the Chinese food shop)
-2 pork chops
-A generous squirt of bbq sauce
-2 garlic cloves
-A pinch salt
-2 tablespoons of soy sauce
– 1/2 a cucumber (to garnish, optional)
Note: Of course you can fill you buns with whatever you like! FYI Wagamamas’ egg and mushroom hirata buns are amazing!

As I said, feel free to tweak to your liking. This recipe serves 4 people so if you are cooking for more/fewer people just divide all of the amounts here by 4 and then multiply by however many people you are cooking for. Okay let’s get started!

Step One: Rinse the frozen dumplings under cold water and then put them in a large pan to boil. Turn them on high for the first 5 minutes and then onto a low simmer after that. The dumplings will make the base flavour for the broth so you want them to simmer for around 25 mins overall for the flavour to develop. A few of the dumplings may even break up during this time but that’s okay, the fillings will only give the broth a richer flavour. While the broth base develops you can get on with preparing your other ramen ingredients and those tasty hirata buns… 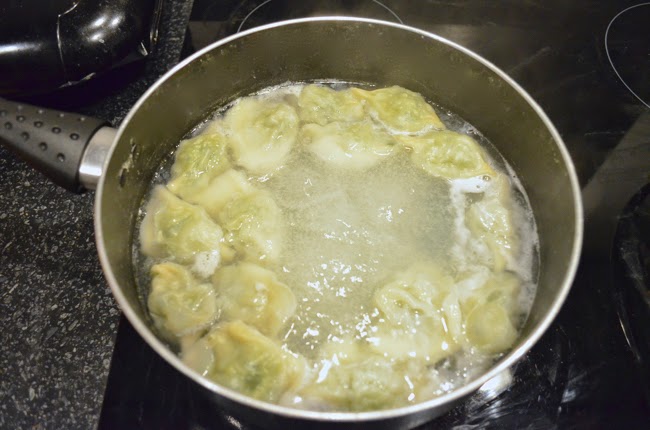 Step Two: As your dumplings simmer away you can prepare your meat (if you wish to have meat that is). I chose pork because it’s delicious and a staple meat in asian cooking. I went with these affordable pork chops from Sainsbury’s (left side of the board). I used a bread knife (yes bread knife – I do not claim to be a chef and was the most suitable one I had!) to trim the fat off the edges of the chops (keep this, it will add great flavour to your soup while it simmers – just be careful to discard it before you serve it up. No one likes rubbery fat trimmings in their ramen!). Then cut diagonally into your chops to get mini steaks to use in your hirata buns. Finally, simply dice the remaining meat and add this to the boiling dumplings along with the fat trimmings for a meaty base flavour for your broth. 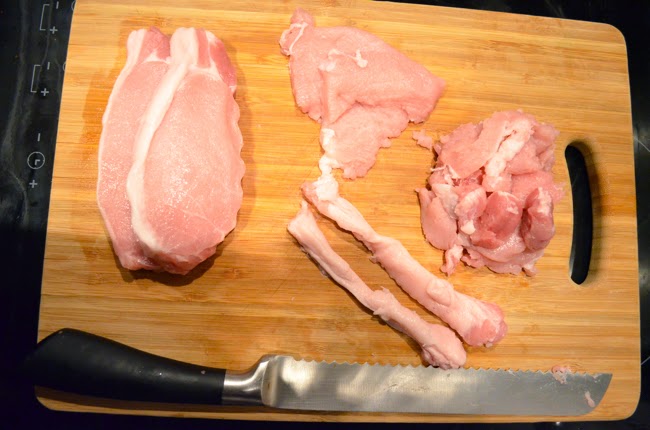 Step Three: Begin the buns! I decided to recreate these delicious bbq pork and cucumber hirata buns that my sister and I had at Shoryu not too long ago. So, I simply seasoned my pork with a marinade of a pinch of salt, 2 diced garlic cloves, 2 tablespoons of soy sauce and a generous squirt of Heinz bbq sauce (gourmet, I know!). I basically threw it all in a bowl and (with clean hands – obvs I know but has to be said), I rubbed the marinade into the meat. As with any type of marinating the longer the better so I did mine the night before and covered it with cling film to soak up the flavour overnight but if you want to do this just before you cook it that’s fine too – whatever works for you! 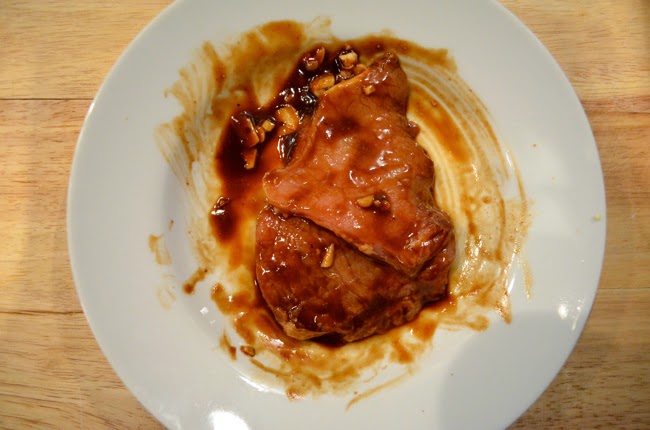 Step Four: Next I added some vegetable goodness to my ramen in the form of the shredded cabbage and the bulbs (white parts) of my spring onions. Keep the green ends of the onions behind as these parts pack less punch so they make a great garnish for the ramen at the very end. 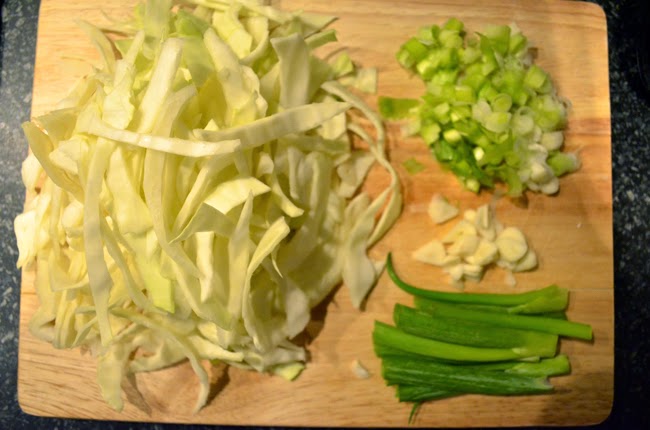 Step Six: At this point I also added five tablespoons of Thai fish sauce to add a depth of flavour and a slight saltiness (key for bringing out the true flavours of food) to the ramen broth. 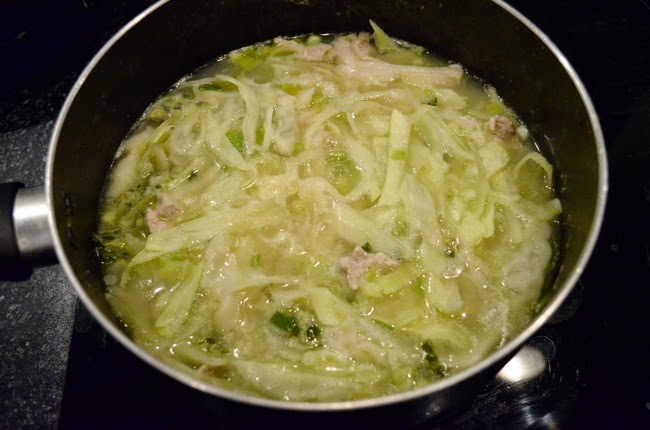 Step Seven: Next it’s time to steam your hirata buns and bbq pork. You can microwave or deep fry the hirata buns but I chose to steam them as this is the healthiest option. I don’t have a steamer (again, not a chef!), so I improvised by loosely wrapping mine in foil and then placing them in a frying pan of boiling water on medium heat. This allows the food to conduct the heat and cook without becoming wet and soggy as the foil stops it from actually touching the water. Just be careful not to tear the foil (I accidentally did this and ended up having to slice the soggy bottoms of my buns. Noone wants soggy buns). Allow both to steam for 15 mins. At this point check that the pork is firm and no longer pink in colour signifying that it is cooked thoroughly throughout (you should be able to see spots of brown pork through the sauce). 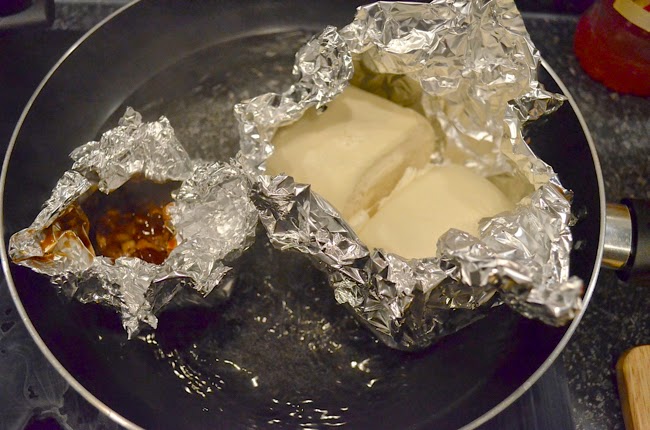 Step Eight: When your hirata buns have just 5 minutes left to go, drop some medium egg noodles (or whichever dried noodles of your choice) into the ramen to soften and soak up the flavours. At this point, if you want to garnish your ramen with a boiled egg put a few couple on to boil (you only need half per person). 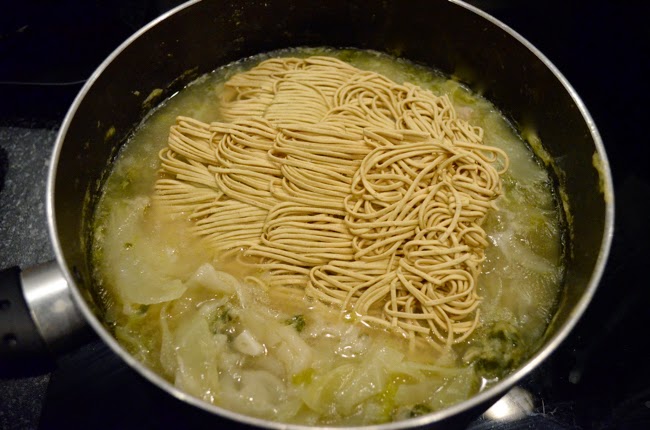 Step Nine: 5 minutes later remove your buns and pork from the heat. Slice the buns and fill with the pork, some cucumber slices and an extra squidge of bbq sauce. 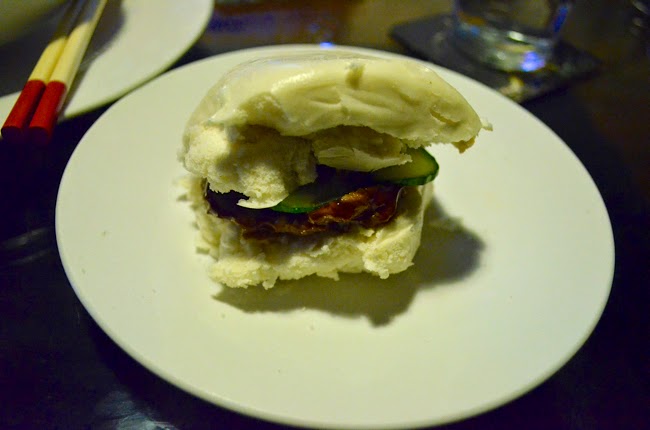 Step Ten: Run your eggs under cold water until they’re cool enough to handle and then gently peel them and slice them in half. Serve your ramen in a bowl (I used two forks to lift my noodles into a bowl and then ladled the broth over them) and then add half a boiled egg, your finely chopped spring onions stalks and some thinly sliced nori (seaweed) to garnish. 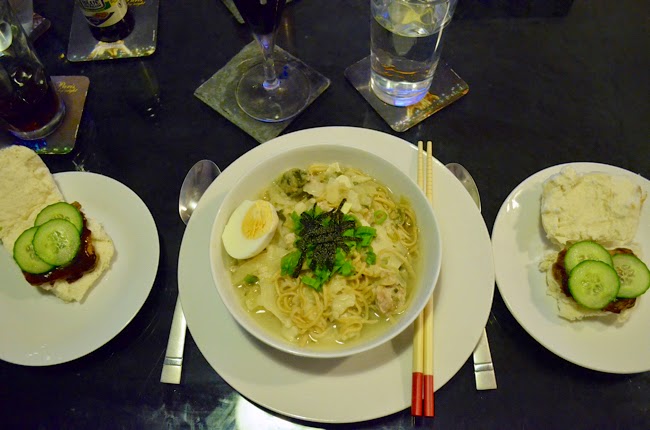 I really hope that you like this recipe! I cook from scratch A LOT and have quite a few recipe posts ready to go so if you like these please do to let me know in the comments below and remember to check back! Do you have any cool cultural recipes you can share with us? I love learning about different cuisines (I was watching Ainsley Harriott learn to cook Bajan street food while writing this – update: I am now moving to Barbados. Okay jk, I wish…) so I’d love love love to ready other posts on new recipes I could try. I also make recipe video like this one on my YouTube channel so if you want to see more of those let me know below!

Right, I’m hosting the #bbloggers Twitter chat at 8pm GMT tonight so I’m off to think up my favourite time and money saving beauty tips ready to join in the chat (expect a post on this!), t’rah for now!

Thank you for reading! If you like my posts pretty please let me know by leaving a comment and why not follow my blog with the bloglovin’ button (below) or by using any of the easy links above/ in the right sidebar! –>>