Let me tell you a little story… A few months ago I was working in an office in London and noticed that another lady there was always wearing the most gorgeous perfume. It was strong enough that I always knew when she was around, even if I couldn’t see her, but not at all overpowering with its soft, coconut-y scent. It had both floral and musky undertones and a warm, finish that reminded me of mixed spice. It was the type of scent that was fresh enough that it’d be great in the spring and summer but warm enough that it would fit right in with the cosiness of winter. The complex and perfectly balance tones meant it smelled incredibly classy and elegant and yet, at the same time, young and new and cool. 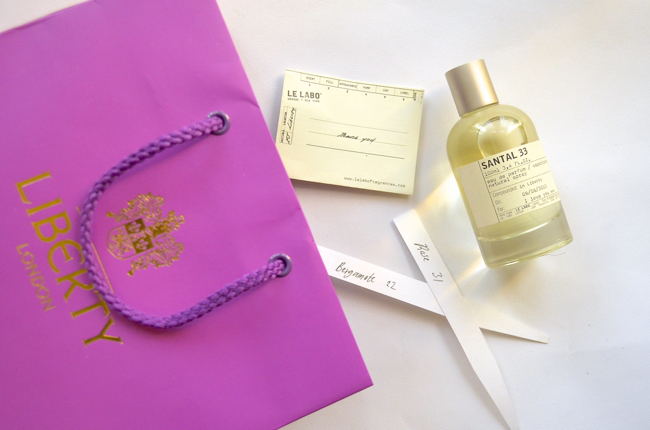 One day, after weeks of admiring it, I finally plucked up the courage to ask her where it was from.

I knew it was expensive, it smelled expensive, but having spent my life lusting over Chanel bags and Louboutins I decided I’d rather know and lust over it than have a voice nagging me forever afterwards saying, ‘but what if? What if you could have afforded it?’ so I asked. “Le Labo”, she replied in an over-emphasised French accent that could only mean that it was very, very expensive. “Damn”. I thought. Oh well…

Nevertheless, when I got home that evening I decide to indulge in a little self-torture and google it just to see. Lily Beau? La Lerboo? Her accent had been so affected I was barely sure what she had said. After a few trial-and-error searches something familiar-looking popped up in my browsing suggestions. ‘Le Labo – Liberties London’. With baited breath I clicked the link. I scrolled down the page until my eyes settled on a price. £105 for 50ml. My heart sank. I closed the web page.

Months later, when I was working elsewhere, I met my boyfriend after work for drinks on Carnaby Street. As we wandered through the cobbled streets I suddenly noticed the familiar front of the Liberty London department store. I’d walked past it admiringly many a time but had never had any real reason to venture inside. Until now. I wanted to smell the perfume on more time so I dragged him inside with me. I quickly located the Le Labo counter with its cool apothecary style decor. I didn’t really want to engage with the salesman at the counter as I knew I wasn’t buying and he must get a lot of lookey-loos coming to touch and sniff but, as I didn’t know exactly which perfume I was looking for, I eventually had to ask. When I told him I was looking for a ‘coconut-y’ scent he immediately knew which one I was after (even though it turns out that there isn’t actually any coconut in it according to the website). Santal 33. I spritzed a tester with some and put it in my pocket for safe keeping. Maybe I couldn’t afford to wear it but at least I could have it with me to smell every know and then.

For the next few of weeks I kept that paper in my coat pocket, pulling it out to drink in the scent every now and then. As the perfume is so fully fragranced the scent lingered on the paper and I was convinced that perhaps people could smell it on me as well. Then, last week, a package arrived. It was in a large box and address to George so I didn’t think anything of it. Perhaps it was something work-related or maybe he’d finally ordered himself a new watch from ASOS I thought remembering the time they sent my Michael Kors watch in ridiculously oversized packaging. He hardly ever bought himself things, good for him. “Why don’t you have a look?” he asked when I enquired what was inside. “A watch, I knew it!” I said excitedly as I opened the box for him – I have a great knack for living vicariously though other people (and their designer purchases). 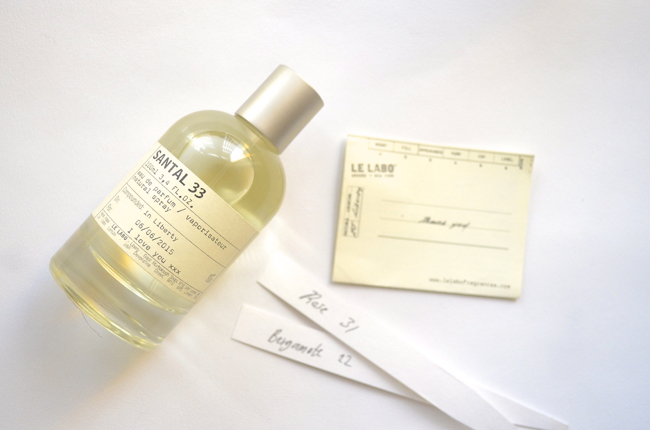 But, as you’ve guessed, it wasn’t a watch. Inside the large brown box was a beautiful fuschia Liberty London bag. And inside that fuschia bag was a smaller brown box. And inside that box, cushioned in tissue paper, was my very own 100ml bottle of Santal 33 by Le Labo, complete with a personalised message on the label.

I still can’t believe that he bought it for me. Firstly because it’s incredibly sweet that he made a note of the brand and scent I liked and waited until I had almost forgotten about it to give it to me. Secondly because, gorgeous as it is, it’s wildly expensive and there was no way that I could ever forsee being able to justify buying it for myself. It wasn’t a birthday or anniversary nor had I asked or even hinted for it. He got it ‘just because’ and that’s the most thoughtful reason to gift someone. Not only do I love the scent but it’s even more special to me now because it represents a loving gesture. I love my new perfume and I love him ♥.

Thank you for reading! If you like my posts pretty please let me know by leaving a comment and why not follow my blog with bloglovin’ (below) or by using any of the easy links above/ in the right sidebar!