Hey! I hope you’ve had a great weekend. With Easter coming up soon I thought I’d bring you some fun chocolate recipes to impress you friends and family starting with the naughtiest one – Cadbury Creme Egg Brownies! 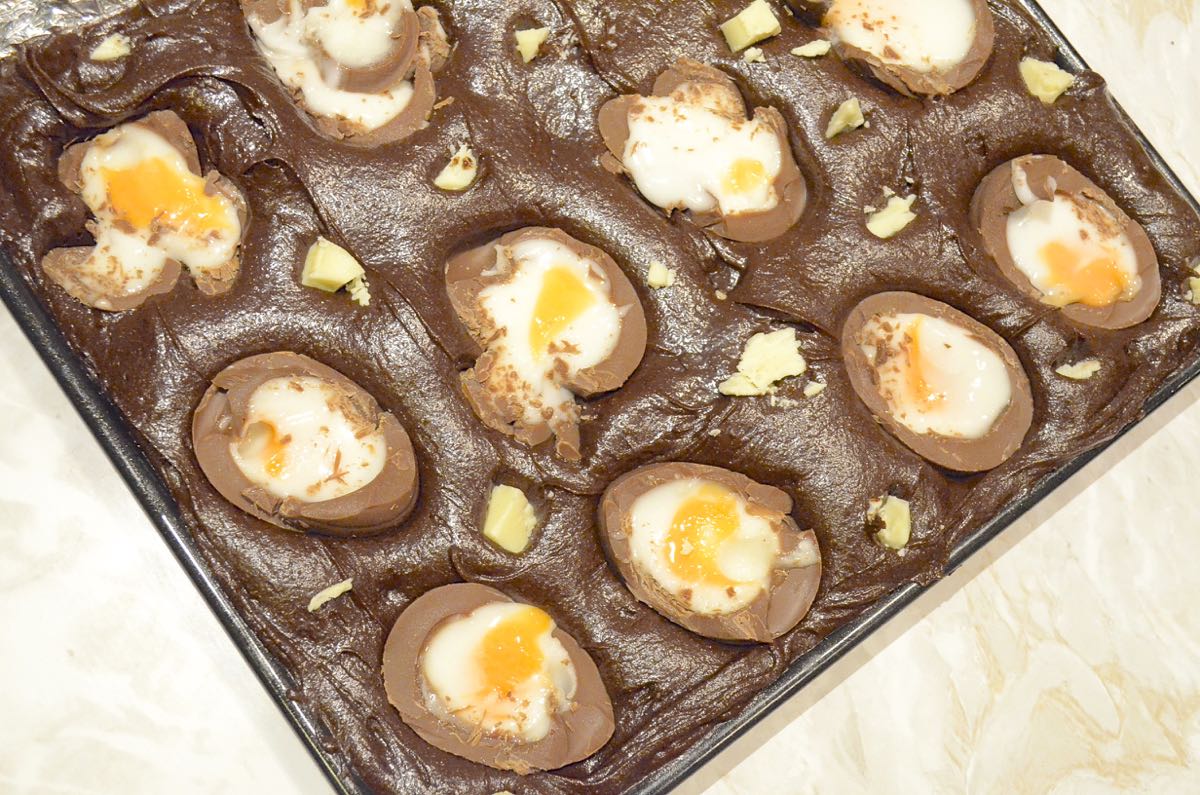 These brownies are dense and indulgent, with a crunchy outer and melt-in-the-mouth, super duper chocolatey centre. Best of, all each slice is adorned with an ooey gooey baked cadbury cream egg. Don’t like creme eggs? Leave them out. This is still the best brownie recipe around (trust me, I’ve tried and tested them all. I know, I lead a hard life…).

Click ‘read more’ for the full recipe and a photo guide!

Okay, so if you’ve read my other recipe posts, you’ll know that I’m not about fussing when it comes to baking. While I do like baking, I’m not about spending all day in the kitchen so this brownie recipe takes just 10 mins to whip up and shove in the oven – happy days!

Step Zero Point Five:
I’m calling this ‘step zero point five’ because it’s optional and I don’t want anyone to panic. Admittedly, I only usually check a recipe the day I want to make it, maaaybe the day before, so if you want to make these right now and you haven’t put your creme eggs in the fridge, it’s no biggie, really. You’ll just have an even more gooey, indulgent tasting brownie as the creme eggs run into the brownie mixture a little more. Otherwise, I recommend cutting your creme eggs in half and refridgerateing them overnight so that, once they’re in the oven, they take a little longer to melt and so hold their form. It’s just a matter of personal preference. I like the baked centre that you don’t get if you push the creme eggs into the brownie after it’s baked (like some recipes suggest), but I also like for the creme egg shell to still be crunchy which will happen if you refrigerate them. What can I say? I’m fussy. Like I said, it’s optional.


Step One:
First, set your oven to 160ºC /320ºF/Gas Mark 3 (180ºC if not fan assisted). Then, get your dark and milk chocolate melting together over a bain-marie (a pyrex dish set on top of a small pot of boiling water) so that it can be melting while you measure out the other ingredients. If you don’t have a Pyrex bowl don’t just use a glass one as it may crack or worse, explode (Pyrex dishes is specially designed to withstand heat, most glass ones aren’t). Instead put the chocolate inside a small pot and then sit that pot inside a large pot of boiling water Russian doll style. Why can’t you just melt it in the microwave? Well you can but chocolate has a tendency to burn and/or go lumpy when it’s melted this way so, if you insist, use a low setting and keep an eye on it. 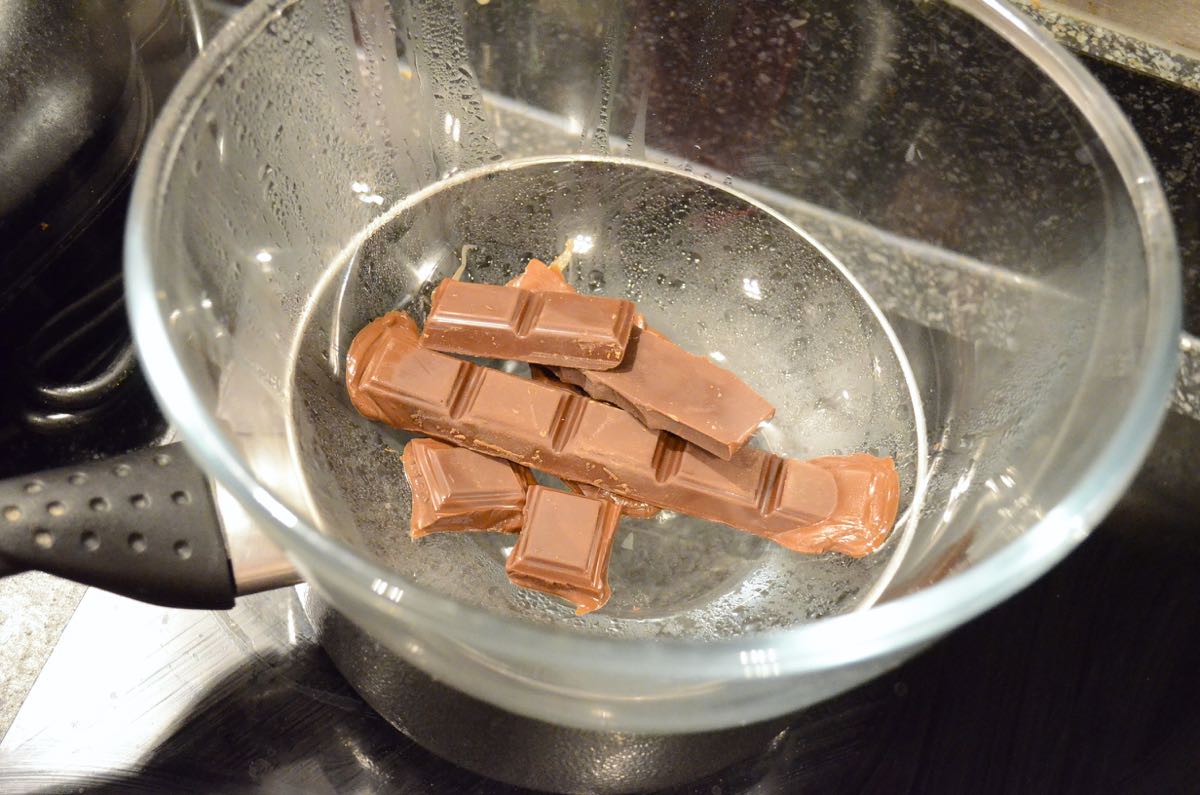 Step Two: Measure You Ingredients
Next, microwave your butter on a low setting until it’s melted (watch it, it won’t take long and burned butter does not taste or smell good). Set it aside to cool and then, measure out your dry ingredients and set them aside in a bowl.

Step Three:
Once your chocolate is melted, take it off the heat and set it aside to cool (yes I said ‘set aside’ again because I’ve set a trend now). Then roughly chop the remaining white chocolate into pieces about 1cm in size and, guess what? Yup, set them aside.

Step Four:
Crack the eggs along with the melted butter and melted chocolate into a mixing bowl and give them a good old whisk until the mixture is nice and frothy. At this point a lot of brownie recipes will encourage you to use a mixer for ten minutes until you have a stiff peaky recipe but, as I so often like to say when perfecting a recipe, ain’t nobody got time for that. Besides, IMO a good brownie should be dense, heavy and rich not light and fluffy. That’s what sponge cake is for. 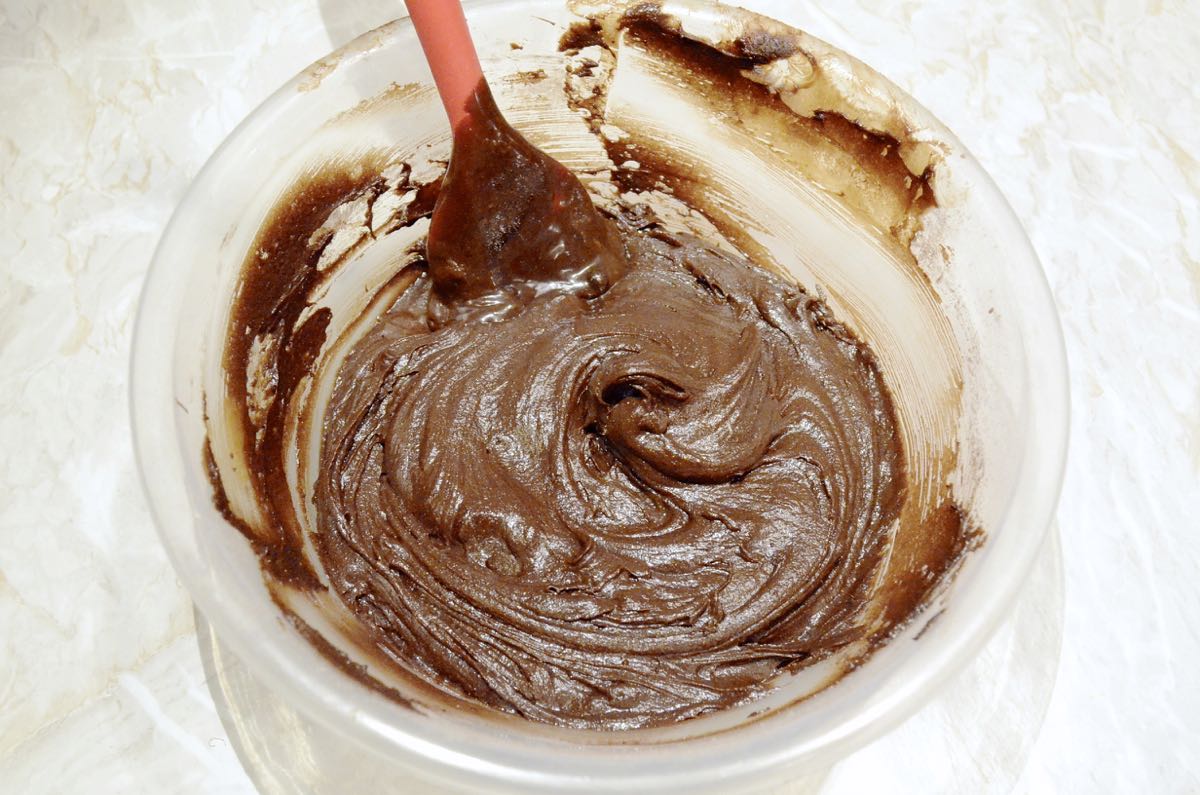 Step Five:
At this point we’re going to slowly incorporate our dry ingredients, folding them into the mixture a bit at a time so that they completely disappear into the chocolate goo. We fold at this point, because while we want out brownies to be dense we don’t want bricks, so we need to incorporate some air into the mixture to encourage the eggs to rise it a little. Add, fold, add, fold until you have a glossy, thick mixture that looks something like this.

Step Six:
Grease a baking tray. I realised that my baking tray was actually a little large for the amount of mixture I had and rather than accept it and make thinner brownies (never!), I used a rolled up piece of foil to make a barrier and essentially resize my tray. You’ll see below that it worked a treat! Pour your mixture onto the greased tray and then arrange your creme egg halves in the mixture as you wish. You can go for a random assortment so that people get different amounts of creme egg in each slice (I know, wild right?) but I like things even and fair when it comes to food so I went for a symmetrical smattering (also I thought it looked more photogenic for this post). Finally sprinkle your brownie with the white chocolate chunks for extra stylistic flair. 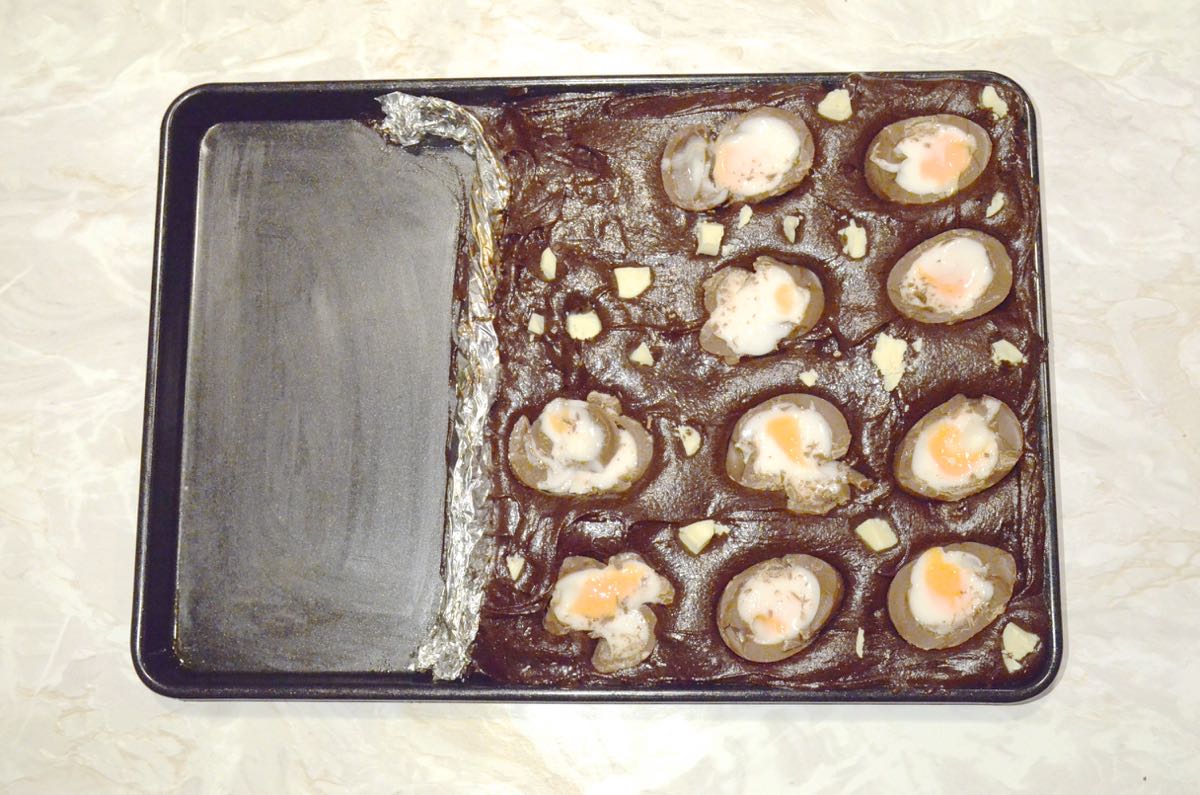 Step Seven:
Bake for about 25 mins. First rule of baking: avoid the temptation to open the oven during this time or your goods may not rise. Unless you suspect a fire, then it’s kind of okay (yes this has happened to me before but don’t worry, it’s wasn’t a brownie recipe so you’re good).

Step Eight:
Once your brownies are crispy on the top and sides are starting to come away from the tin they’re done (if they still look wobbly in the centre, stick them in for a few more minutes and test again). Set your tray aside (woop woop!) to cool and then, once they’re barely warm to the touch, slice them evenly (or cut yourself an extra big slice – chef’s privileges) and serve. If you’re not eating these right away,  wait until they’ve cooled completely and then slice them and transfer them to an airtight container to store in a cool, dry place. 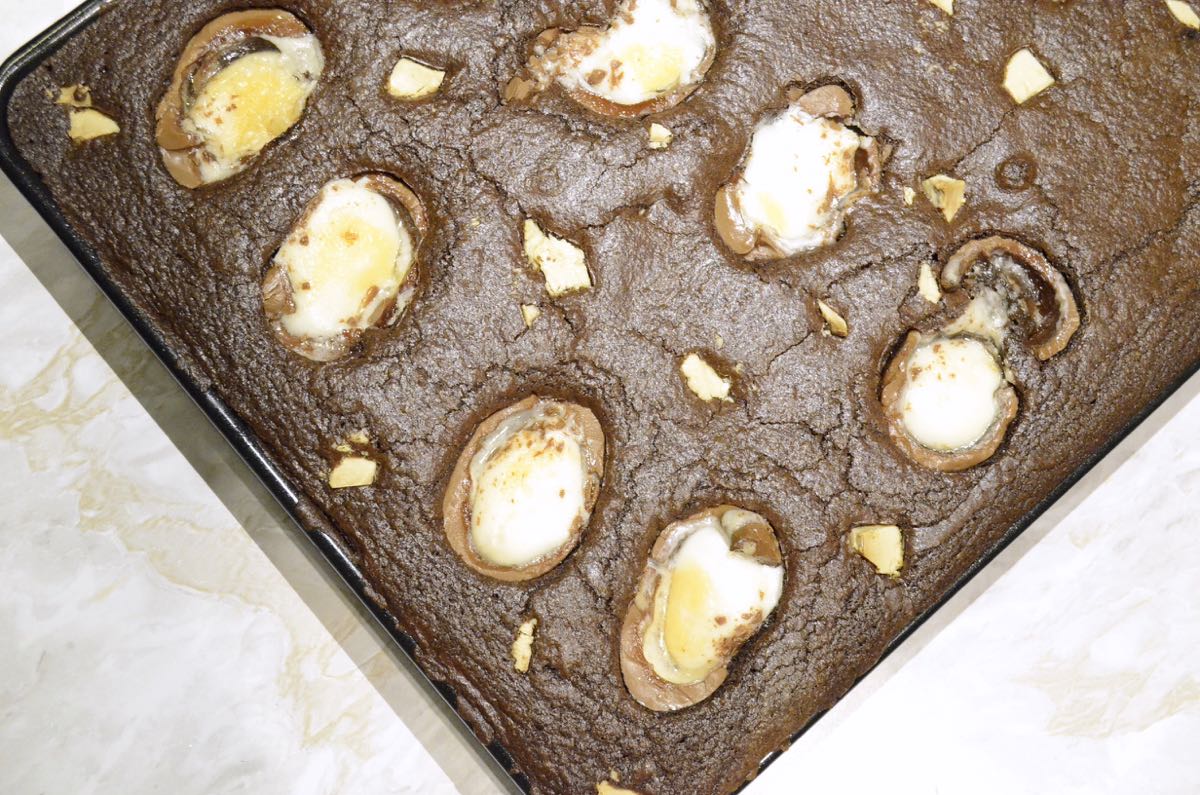 I hope that you like them! I’m obsessed with this brownie recipe, creme egg or no creme egg. It’s taken me a while to perfect. If want a brownie, I want an uber chocolately, crunchy on the outside, gooey on the inside treat that leaves me feeling full and satisfied, otherwise it’s just a square piece of chocolate cake! I took this batch to a friend’s house on Friday night for a girly evening of wine and chit chat and they went down a storm. I also treated my friend, Evan, to a slice today when I met him for brunch and he commented on how heavy it was when I handed it over haha. The sign of a good brownie!

I’ve also seen creme egg brownies done where people have used a deeper tray and then dropped and entire creme egg into the mixture so that, when you bite into them, you a get a cross-section of the hidden brownie which looks really cool so I’m gonna try that next time… Until then!