I was going to write a post about mindfulness this bank holiday to get us all mentally prepared to return to you-know-where tomorrow but I thought, ‘WTF Jade? No one wants to think about that today!’ so I settled on writing about a massive street party instead – cue cheers and whooping. Let’s talk Notting Hill Carnival. 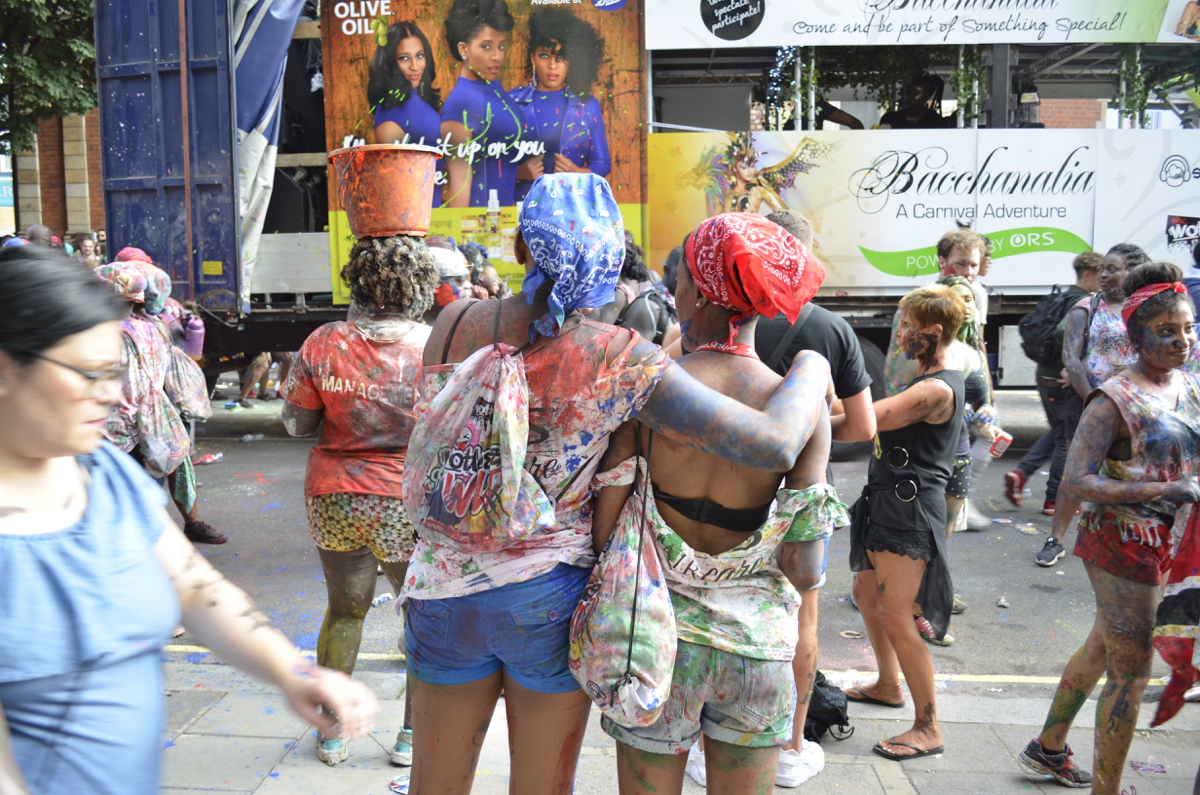 What really made me want to write about the Carnival actually was the déjà vu of inviting friends to come along each year only to be met with a resounding chorus of, ‘it’s not my thing’ from people who I know for a fact have never been. How can you know that you don’t like something you’ve never tried? Having been to ‘Carnival’ many times since I was a small child and having been friends with these people for several years, I can say with much confidence that actually Carnival is very much ‘their thing’ because I’ve witnessed them make day drinking, dancing in the street and general merriment, often with total strangers, ‘their thing’ many many times. However for some reason, as soon as there’s a cultural element with which they’re not entirely familiar involved suddenly it’s not ‘their thing’. Well sorry but I don’t buy the bullshit. 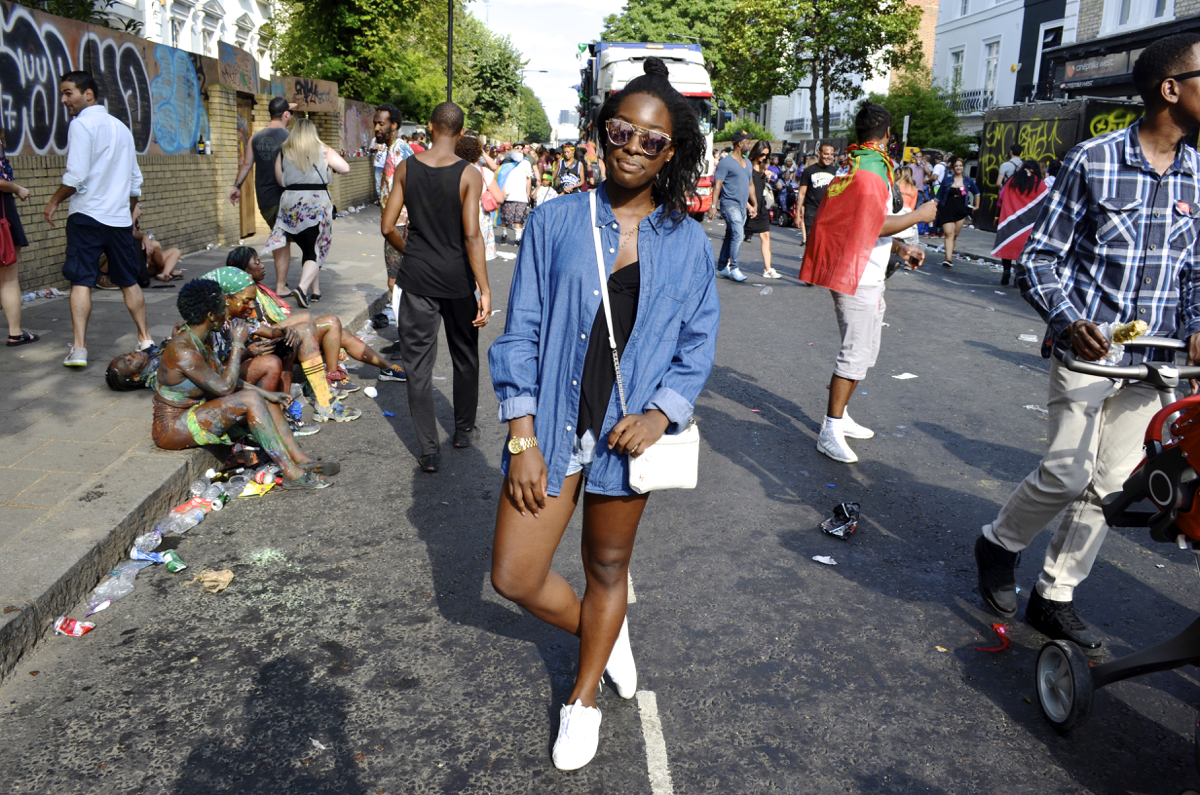 It’s basically a massive street party – what’s not to love?! If any of these friends could give an actual concrete reason for not wanting to go I would of course be totally accepting. Anxious of crowds, fear of loud music, intense distain of port-a-loos – all valid reasons to avoid Carnival. But since these are the same friends who gleefully run to Glastonbury and Reading festivals every single year, having dragged me with them on a few occasions, I know that none of this is true. 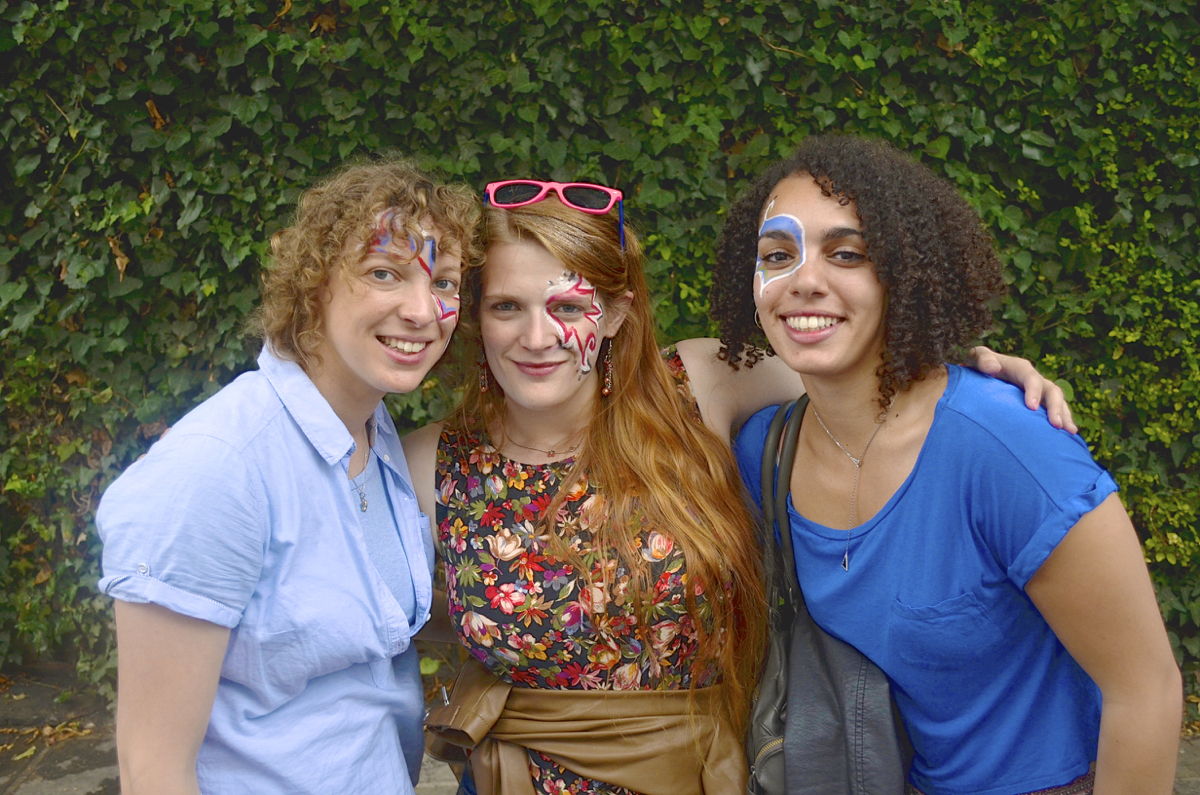 Some people are genuinely apprehensive about the atmosphere at Carnival and unsurprisingly it’s always those who have never actually been. The greatest thing about Notting Hill Carnival is without a doubt the spirit. From toddlers on the shoulders of parents to retirees on decorated electric scooters, for one weekend a huge cross-section of people gather together to join the party and spread the spirit of summer. People of all ages, races, genders and sexualities come to Carnival to momentarily drown out the worries of everyday life and instead fill their heads and hearts with the atmosphere of the day. Suddenly, on a day when most would usually be working, a section of the gloomy city is filled with music and colour and laughter. Strangers dance together, overcome with the jovial atmosphere of the day. 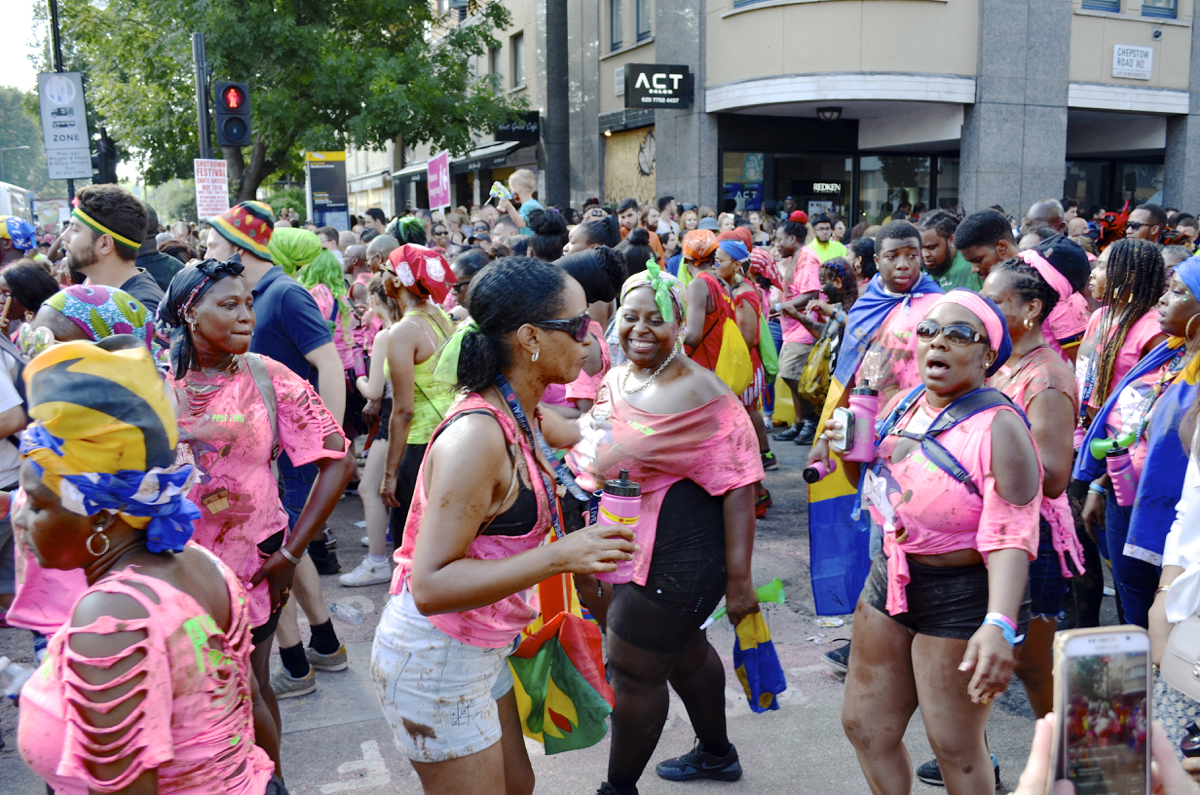 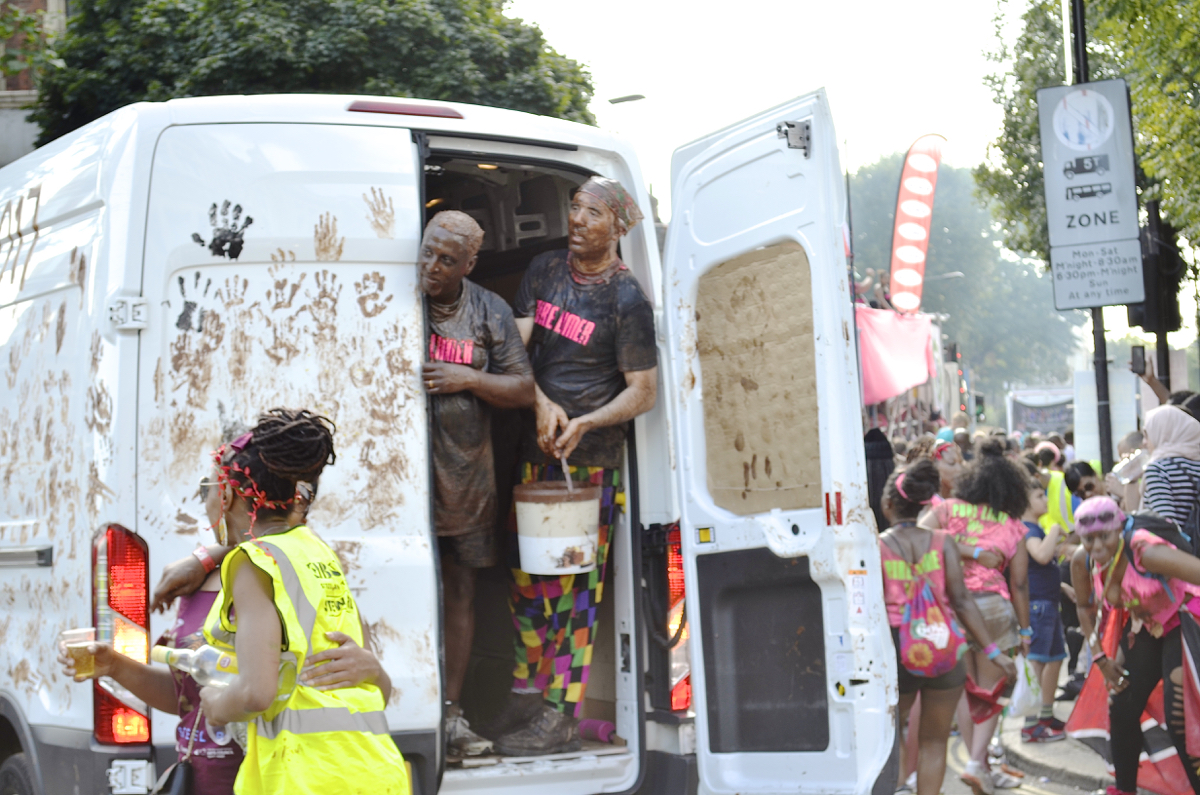 Floats playing music solely for others’ enjoyment, parade through the streets lead by dancers in colourful costumes and followed by loyal revellers who just want to follow the beat of the music while they can. Usually the parades are made up of community groups, youth groups, church groups and charities. Good people who have come together to raise awareness for their great cause whilst spreading happiness. They spend weeks on preparations, hand-sewing costumes and practising their dance moves ready to fill the streets with festivity for two short days. So what if you don’t know the words to the songs? Most of us don’t, we just jig along to the music and enjoy the beat, calling back to the DJs when they invite us to repeat a line. Not much of a dancer? That’s completely fine, watch the parade from the pavements or roam around and soak up the atmosphere. Eat, drink and be merry. Just, enjoy.

In the current climate especially, safety can be a genuine concern. I can’t deny that pretty much any time I venture into central London or any major city now for that matter, I have a fleeting thought about what terrible thing might happen whilst I’m there. We’re all human, it’s only normal. But I wouldn’t let it stop me going to Notting Hill Carnival any more than I let it stop me going to my local Tesco. In fact, I actually feel a lot safer at Carnival because the police presence is like nothing you have ever seen before. There are armed officers on every corner, literally every single corner, as well as regular bobbies. Not in a menacing way but for reassurance. They’re vigilant but still respectful of the fact that the vast majority of people are just there to have a good time which is all they are there to promote too. It’s not uncommon to see an officer shimmy along to the beat of the calypso whilst a jolly lady jiggles playfully in front of him/her. It’s all part of the fun.

This year there has been a moment’s silence held for all those affected by the Grenfell Tower tragedy. Fitting, as Notting Hill Carnival is a great representation of how the spirit of the people, all the people, cannot and will not be broken. What once started as a celebration of the often overlooked Afro-Carribean culture, has grown to mean so much more. In these uncertain times, people from all over the world still find it within themselves to gather together in the streets and celebrate all that is good in life because if you are reading this now then you know that there is still so much to be grateful for. 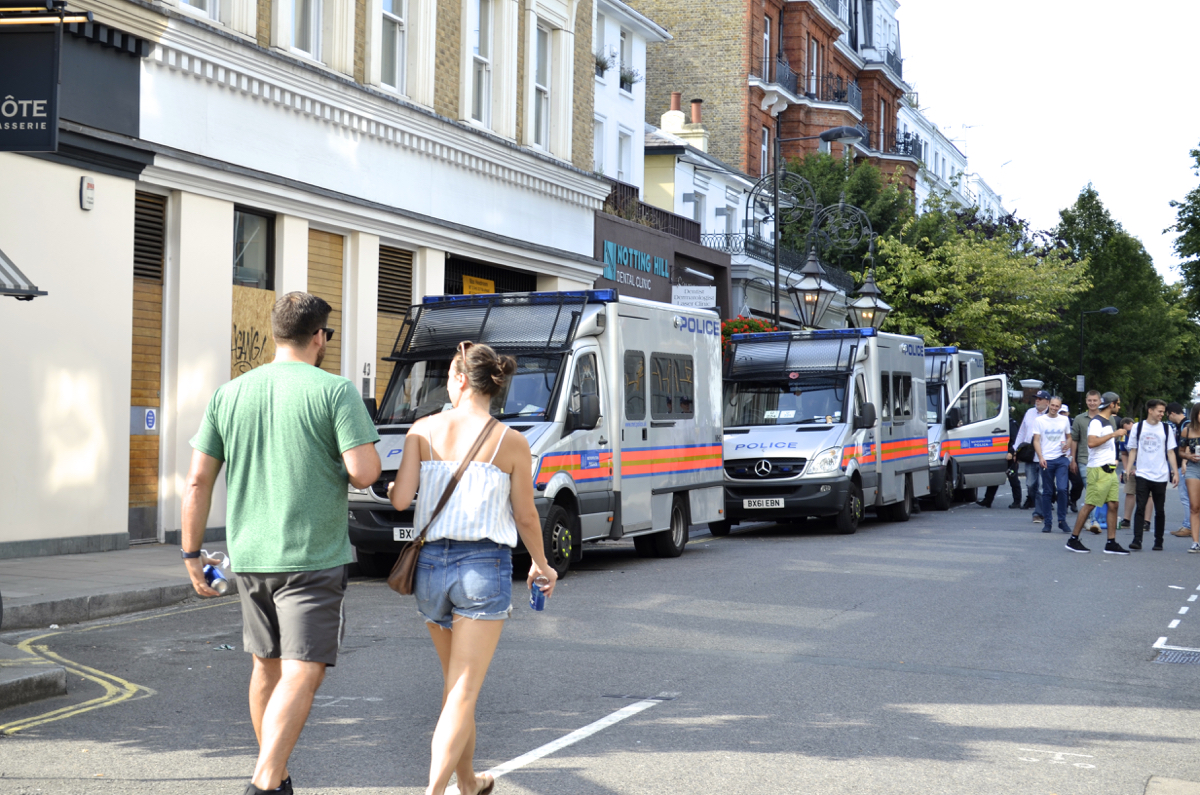 For the majority of people the party ends at 7pm and the streets clear as people return to their homes or move on to pubs and private parties to continue the celebrations. Sure, it’s true that after dark some silly bastards might arrive looking for trouble but when is this not the case? It doesn’t get dark until hours after the parade has cleared anyway so what would you still be doing there at that time? The Notting Hill Carnival has always been and will always be about people coming together to have a good time. I think it’s such a shame to let something that is so pure in positivity be overshadowed by the ignorance fuelled by sensationalist news and hearsay. If you have been to Notting Hill Carnival and it is indeed ‘not your thing’ that is, of course, totally okay but I encourage those who have never been to give it a try before rejecting the very notion. Or at least to keep in mind the meaning and the positive accounts of Carnival from the real people who actually attend instead of believing the negative media hype. As Wayne Dyer once said, ‘The highest form of ignorance is when you reject something you don’t know about’.

For those who are still curious, I wrote a more detailed post about specifically what you can expect to see, do and hear at Notting Hill Carnival here. I’m also vlogging this bank holiday weekend so I’ll be posting a vlog of this year’s Carnival on my YouTube channel next Sunday. If you’d like you can subscribe to my channel here so you don’t miss it!